As Uzbekistan is the heart of Central Asia, as Fergana volley is the centre of Uzbekistan. More than 7 million people, nearly third part of the whole population, live on this fertile plain of Syr Darya river. The river goes down from the Pamirs and stretches for nearly 300 km long and 150 km wide; at the same time it is surrounded by Tien Shan tops – Chatkal mountain chain on the north, Fergana on the east, and Pamir-Alai on the south. Khojikent gates on the south had been the best passageway for merchants and conquerors, where the river leaved the valley and went to the steppes. Khojikent town originates from the conquest times of Alexander the Great in 329 BC, when Macedonian created his ninth Alexandria – Alexandria Eschate ("The Furthest"). Two centuries later, Chinese messenger and pioneer of The Silk Road – Zhang Qian had reached the valley after ten years of wandering because of nomads’ raids on Chinese borders. Fergana valley includes 6 cities: Kokand, Fergana, Marghelan, Shakhimardan, Andijan, and Namangan. Called mystically “City of winds”, Kokand had shared its name with powerful khanate of 19th century, stretching from Fergana valley to Tashkent and south Kazakh steppes. Being younger town than others, Kokand had bloomed quickly into perspective trade and religious centre, competing by gifts of Central Asia with Khanate of Bukhara and Khiva. Fergana city became third in size in Fergana valley with 220 000 population. Founded in 1820 20 km from Marghelan, it had been named New Marghelan, later in 1907 it had become Skobelev (in honor of first military governor), and finally in 1927 it had taken the name of the valley. Wide roads are scattered in semicircle from old military fortress, reminding St.-Petersburg’s design of Tashkent. Parks, fountains, Russian architecture, and industrial areas make stronger the similarity and contrast with Uzbek Islamic Marghelan. Long keeper of silkworm breeding secrets, Marghelan had been the biggest stop on the Silk Route till 9th century; though, local legends related the birth of town history to the times of Alexander the Great. On his arrival he had been presented with chicken (“murgh”) and bread (“non”), after this the city got its name. Later in 15th century Babur saw the city full of different kindness. Its peaches and pomegranates were delightful; living creatures and wildfowl were good; many noticeable champions of Samarkand and Bukhara were from Marghelan. Summer similarity of Fergana valley with boiling pot makes many people recall forgotten traditions and head for the mountain foot. Popular resort Shakhimardan, where constant cool air, seething rivers, and mountain lakes are, has its double charm in political and religious pilgrimage. The roads go along seething Shakhimardan River till its source in the town, where the purest Kok Su river interflows with waters of shining Ok Su river. Famous in 10th century as Andijan village, stable development of Andijan had marked and strengthened full-scale defeat of Mongolian epoch governing. Later in 13th century, Kaidu Khan, grandson of Genghis Khan, remodeled city into capital of Fergana. It remained so during 3 centuries, naming the whole valley after his honor under Turkish Chagatai. In the capacity of eastern gates to Transoxian, Andijan had been the centre of profitable trade with Kashgar. Namangan city has the status of the third biggest city in Uzbekistan after Tashkent and Samarkand; also, it is new relative city of the cradle of Fergana civilization. Its name was originated from local salt ore “namak kann”. It had been salt provider of Tashkent for a long time. During Russian occupation, Andijan region became the Islam bastion with more than 20 madrassas and 600 mosques. Tsars and Soviet Era russified the centre, and submountain areas turned into industrial appendage, increasing the population to 330 000 people; but they could not subordinate the people. “After visiting Uzbekistan, you will be fully surrounded by respect and hospitality, and local families will welcome guests under their shelter with joy”. 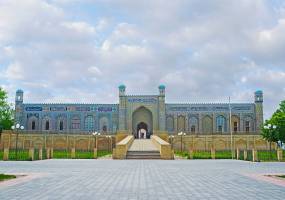