To the north of the Gur Emir tomb is located the Mausoleum Rukhabad ("Abode of the Spirit"), built over the tomb of a medieval scholar and theologian, preacher and mystic Burhaneddin Sagaradzhi, who died in the XIV century.

According to the Arab traveler Ibn Battuta, Sheikh Burhaneddin Sagaradzhi in the 40s of the XIV century was the head of the Muslims in Beijing. When the sheikh died, his son Abu Said moved his father's body to Samarkand, as bequeathed to the deceased, and buried next to the burial of Samarkand Sheikh Nuriddin Basir. Abu Said himself remained in Samarkand and became one of the most prominent and respected Muslim leaders in the court of Amir Temur, at the behest of which was erected a mausoleum over the grave of Sheikh.
The building was constructed on one of the alleys, which in the XIV century led to a located just south of the mausoleum Gur Emir, and was paved with light-colored stone.
Inside the tomb there are graves of the sheikh Burhaneddin and his wife ("Chinese princess"), his children and other members of Sagaradzhi family.
Legend says that the owner was Burhaneddin Sagaradzhi casket with a few hairs of the Prophet Muhammad, who were immured in the base of the dome of the Mausoleum.
Amir Temur never drove past the mausoleum on a horse. Out of respect for the Holy, he was dismounting, and this stretch of road on foot.
Earlier, at the base of the Mausoleum located the pool ("Hauz"). Reflections of the Mausoleum in the pool further emphasized the height of the building.
In the 1880-1882 beside the mausoleum appeared same name mosque, which until 1941 remained valid. Her work was resumed in 1991. 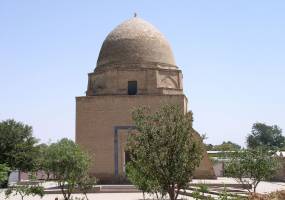