Small town of Shakhrisabz (Persian “green city”) is located 90 km south of Samarkand, at the foot of Gissar and Zeravshan mountain ridges, at the confluence of Aksu and Tankhoz rivers. This is one of the most ancient cities of the world; some resources say that settlements had existed there by 1700 BC. Phalanxes of Alexander the Great had marched here; Bactrian satrap Bessus had been captured on this territory; anti-Arabic movement had been born, and the Great Silk Road caravans had been passing in Shakhrisabz. Once ancient Kesh, birthplace of Amir Timur, and ex home residence of Timurids used to be greater and richer than Samarkand. Only some historical monuments have remained here, but all of them are unique and have huge historical value. The sights of Shakhrisabz are Timur’s palace Ak-Saray (“White palace”, 1380-1404), which is mostly ruined, but it is being restored intensively. In addition to giant gates 40 m high, you can see magnificent filigree mosaics and unique (by technology) examples of wall laying, which are the evidence of greatness of this big summer residence. Ensemble of Dorus-Saodat mausoleum (“Place of power”, 14th) – crypt of Djakhangir and Omar (Timur’s sons) is not less interesting. It can be compared with Ak-Saray by its size and decoration. Religious places of the town are Dorus-Tilovat ensemble (“blue mosque”, 14th) – Shamsiddin Kulola mausoleum (spiritual leader of Timur), graceful Ghumbazi-Seyidon mausoleum (16th, Ulugh Bek’s descendants lie there), and cathedral mosque Kok-Ghumbaz (1435); also Khazrat-Imam mosque (14th), and Timur’s tomb - mausoleum of great conqueror’s relatives (he was buried in Samarkand). 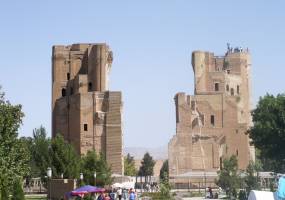 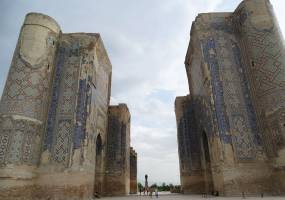