Fascinating cultural and informative tour will introduce you to the ancient history and culture of Uzbekistan, the world famous ancient monuments of Samarkand, Bukhara and Khiva. These cities still keep a memory of Alexander the Great, Genghis Khan, numerous trade caravans of the Great Silk Road.

Here the heart was pulsating with the cultural life of a powerful empire of Tamerlane. Tall and elegant minarets, grandiose madrassahs and mosques, medieval palaces and mausoleums decorated with stunning ceramic ornaments, bustle and colors of oriental bazaars, fabulous legends, warm hospitality and ancient traditions of the local people will leave a lasting impression in the memory of tourists.

Description of the program

Arrival in Tashkent. Transfer to the hotel.  Rest

Excursion around Tashkent: the old town, the architectural and religious complex Hast - Imam (Hazret - Imam), with a grand Friday mosque, the  medieval mausoleum Kaffal Shashi (XVI c.), Barak - Khan and Kukaldosh (XVI-XVII c), Islamic University library in the mosque Thiel - Sheikh with one of their original Koran of Caliph Uthman (VII century), the oldest in the world; square "Istiqlol"  with Madrassah Abdul Kasim XVI-XVII (here are now working and selling their original products and souvenirs artisans), a monument to Alisher Navoi; square of Amir Temur (Tamerlane), a park, an equestrian statue of Tamerlane, surrounded by historical and administrative buildings - Palace of Forums, museum of Temurids , Tashkent chimes, etc.; monument "Courage" - a monument to victims of the devastating 1966 earthquake in Tashkent; Opera and Ballet Theatre, built by Japanese prisoners of war in 1945, and the light and music fountain; Independence Square (Independence) with the monument of Independence Arch "Ezgulik" eternal fire, fountains; Oriental Bazaar Chorsu, museum of arts and crafts with a rich collection of products craftsmen of Uzbekistan. After lunch, drive to Samarkand (350 km, ~ 5 h). Hotel.

Transfer to Khiva through the Kyzyl-Kum desert (500 km, ~ 8 hours). On the road trip across the desert and on the shore of the largest rivers of Central Asia, the Amu Darya. Accommodation at the hotel. Rest.

Transfer to the airport for flight from Tashkent. 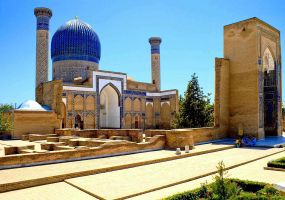 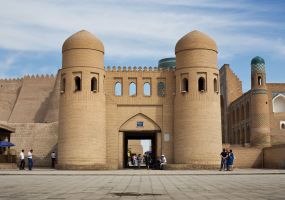