Samarkand is one of the most ancient cities in the world, peer of Rome, oasis of ancient Silk Road, and the capital of great Timurid Empire. It is satiated in the Zeravshan River valley in the south-east of Uzbekistan. The city had been famous since middle of the first millennium BC, and for the first time it was mentioned in avestian texts as Markand – the capital of rich area of Sogd (Sogdiana). Almost completely ruined by the army of Alexander the Great, legendary sogdian Afrasiyab had been built from the start a bit aside from its first location, and it became again the centre of Asian province (of the city titles – “Makhfuza” can be translated as “protected”). In 4th century BC Samarkand was a part of Selevk empire; in 2nd-1st centuries BC Backtrian kingdom was prospering on these lands. In the beginning of new millennium the region was under the power of Kushan kingdom. In 712 Arab troops under the command of Kuteiba ibn-Muslim had conquered the city, but in a year first popular uprising broke out; these uprisings were shaking north-east outskirts of the caliphate for almost a century. Thanks to them in 809 Samarkand became relatively independent and the biggest city of the region. In March 17, 1220 troops of Genghis Khan had entered the city, and after his death in 1227 it became the residence of the second son of – Chagatai. When Timur came to power (1370), Samarkand became the capital of his huge empire and started its unprecedented cultural and economical bloom, which continued with Timur’s grandson – Ulugh Bek. In 14th-15th centuries citadel and fortified walls were constructed; wide streets were built; grandiose architectural ensembles were raised; and the perimeter of the city was surrounded by giant circle of 13 parks and gardens. Most of these objects are still the main symbols of the city. Main attraction of Samarkand is Registan (el Registan, 15th-17th), one of the most beautiful squares in the world. Surrounded by such number of great ancient monuments, minarets, and mausoleums, the square seems giant exposition hall of history. Especially exciting thing on the square is the meeting of the dawn, when deep shadows create very fantastic combinations of forms and reveal the most unapparent peculiarity of filigree stone engraving pattern, which decorates walls and portals of surrounding buildings. Samarkand amazes by the monument buildings’ decoration; glazed revetment art reached its highest point exactly here – there was no even a little part of surface of old constructions without décor. None of the world architectures knows such unrestrained abundance of multicolored ornamental painting, gilding, and glazed revetment – neither before nor after. Bright example is Tillya-Kari madrassah (17th), which got its name “Gilt” thanks to interior of domical hall performed with “kundal” painting. Even famous masters of caliphate did not know such solid gilding of huge areas. Starting the trip from Registan, you can go around whole old town, visiting such unique cultural monuments as Ishrat-Khona mausoleum (women from Timurids’ dynasty lie there, 15th); observatory of Ulugh Bek (1428-1429); Rukhabad mausoleum (burial vault of Islamic mystic Burkhaneddin Sagardji, 14th); Khodji Abdi-Darun mausoleum (10th-17th); imam Al-Bukhari mausoleum with splendid cupola decoration (9th-13th, it has been completely restored recently); and biblical prophet Daniel mausoleum (14th). There are madrassah of Ulugh Bek (1417-1420), Sher-Dor madrassah (1619-1636), and Tilya-Kori Madrassah (1646-1647) around Registan. Religious place of Samarkand is cathedral mosque of Timur – Bibi-Khanym Mosque (the biggest medieval building in Central Asia, 1399-1404). There is Timur’s and his descendants’ mausoleum - Gur-e Amir (1403-1410) not far from Bibi-Khanym Mosque. It amazes by its perfect proportion and forms’ symmetry, which remind giant blue tulip. Panels of its interior walls were made of yellow-green marble, painted by blue color, and trimmed with gilt in the way that creates the glimmer and lightness effects of the whole interior volume of burial vault under cupola space. City museum of art, Ack-Sarai mausoleum (1470); Namozgokh mosque (17th); Khodja Akhror madrassah (15th); Khodja Abdi Darun mausoleum (9th); Chupon Ata mausoleum (1430-1440), and Khazrat-Khizr mosque (19th) are also interesting to visit. From the south Afrasiyab city adjoins to the town boundary (7th-2nd centuries BC). Unique ensemble of Shah-i-Zinda necropolis is situated in the north part of Afrasiyab, which consists of mosques, mausoleums, and cenotaph of Muslim Saint Abbas ibn-Kussam (11th-15th). Here is Afrasiyab Museum with wide collection of archaeological finds, made in the territory of this ancient city. You should also visit city market Chorsu (17th); travel to close Urgut with its well-known market and centuries-old plane trees; go to Khazrat-Daud (Muslim name of biblical king David) cave in the Turkestan mountain ridge, not far from Aksai settlement. 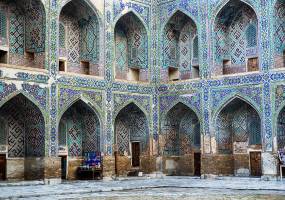 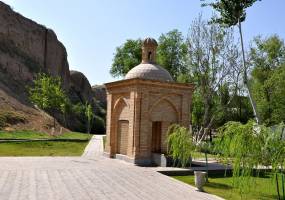 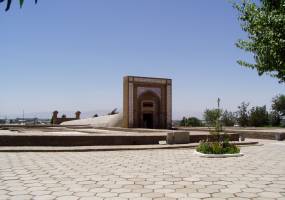 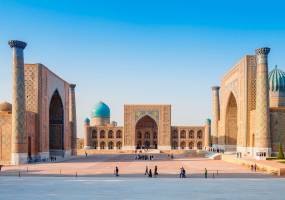 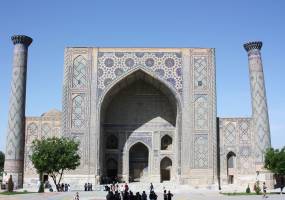 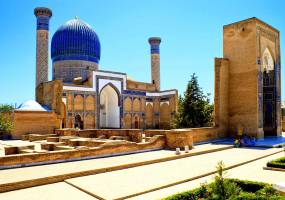 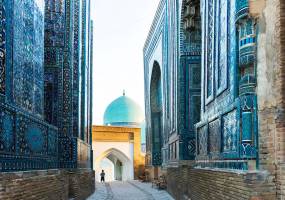 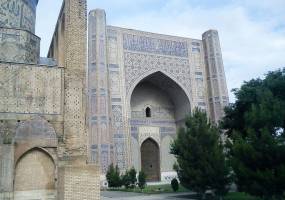 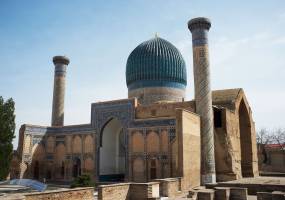